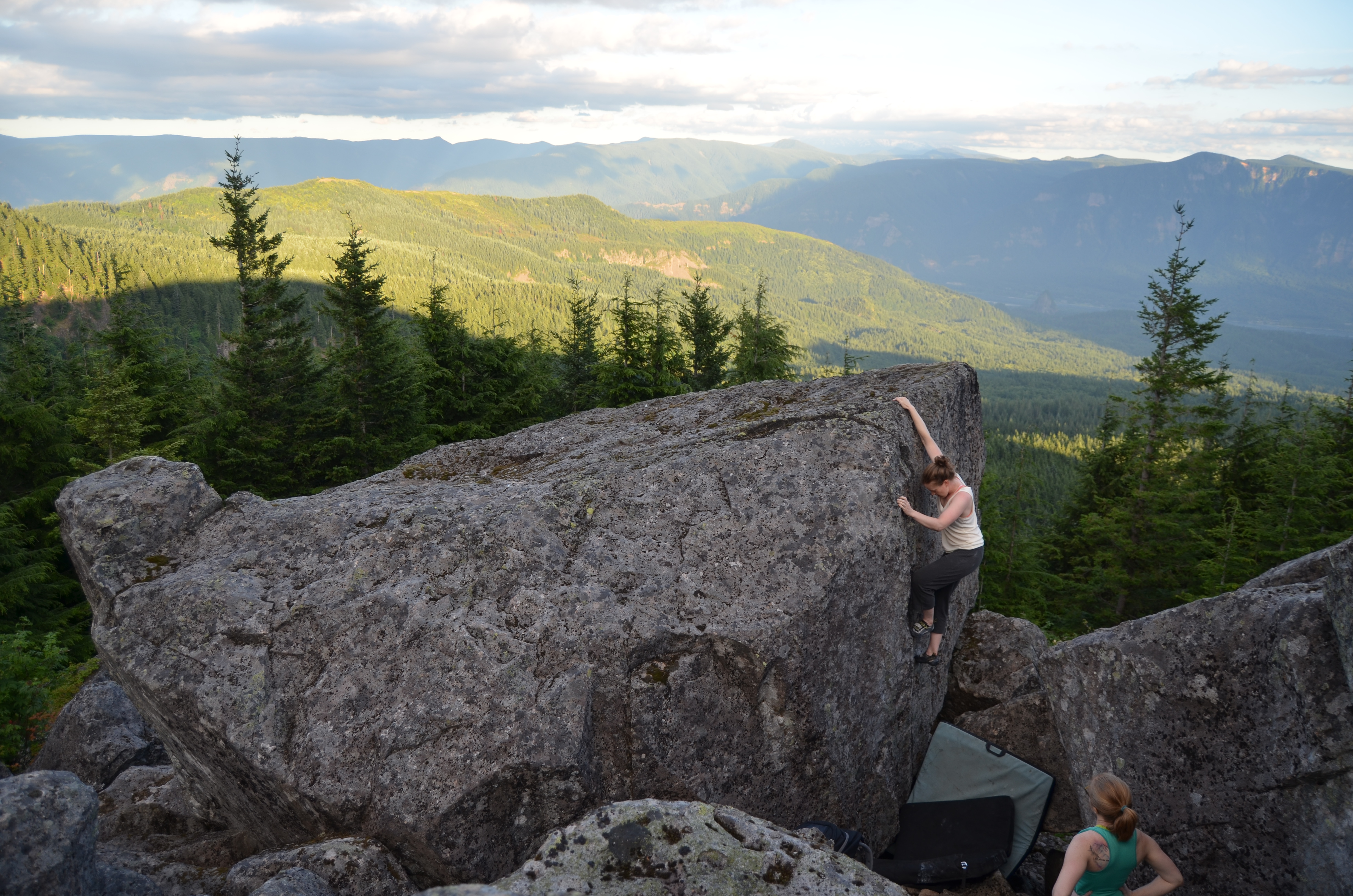 Bouldering in the Gorge, Mt Hood, and Portland Metro 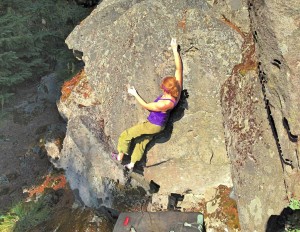 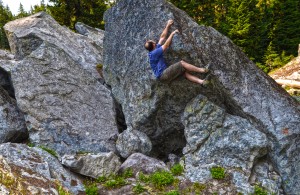 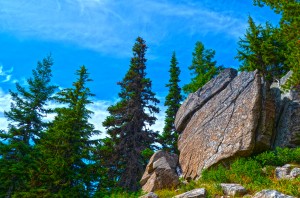 -->
Dozens of areas through the Columbia Gorge, in the city limits like Shwingus and Carver, and near Mt Hood. Areas are dry in winter at times but others not.
Portland has many areas that have been recently developed or developed in the 90s. Many areas are clean but others need TLC. Use only soft brushes when cleaning. Anything else can damage rock!
Climbing is allowed at most areas in Portland. Many areas are on public lands that allow climbing and bouldering. Carver is an exception where you must join the Carver Climbing Club.

Share some beta or photos with us from your last visit. It will help others to see what awesome sends you did and help the community to experience the area. 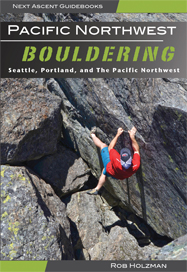 The Portland bouldering scene has gotten much better since 2011. New problems have sprung up and there are even new areas all over Northwest Oregon and Southwest Washington. Core development of Cascade Boulders, Lost City, Larch Mountain bouldering areas, climbing in the Columbia River Gorge, Mount Hoods areas like the West Fork Boulders and a slew of other bouldering areas has finally put Portland on the radar for being much more than just a trad climbing focus.  In the late 2000’s, areas like Carver and the Bridge of the Gods boulders were all climbers wanted to visit.  When Jared Bernert started developing would-be classics a decade ago near Cascade Locks at BOG boulders, this small area became the go-to destination for weekend bouldering around Portland.  The area still boasts some of the best boulders and testpieces for Portlanders to throw themselves onto.  After Greg Lyon started to delve into the scene, areas like the Magma Zone (mainly developed by Mike Pajunas) , Beacons cliffside boulders, and Bulo Point with the Meadow annex started to see attention but eventually became second to the difficult lines at Carver. In 2011 areas in the Gorge finally started seeing a lot of activity by Portland locals.  Areas like Larch Mountain boulders, Cascade Boulders, West Fork and Lost City bouldering area on Boulder Mountain.  In recent years climbers like Aaron Vitt and Rich Crowder along with many other devoted boulderers from Portland, have started to develop the bouldering around Hamilton Mountain and Lost Lake as well as several other high-quality spots.

If you enjoy the climbing in Portland, I recomend sampling the bouldering as well.  Many new areas are worth exploring and many new problems are located at over 50 areas within an hour of the Portland metro.  Below is some information to get you to these areas to try them out.  Check back here regularly for updated information on areas in Portland and the Gorge. 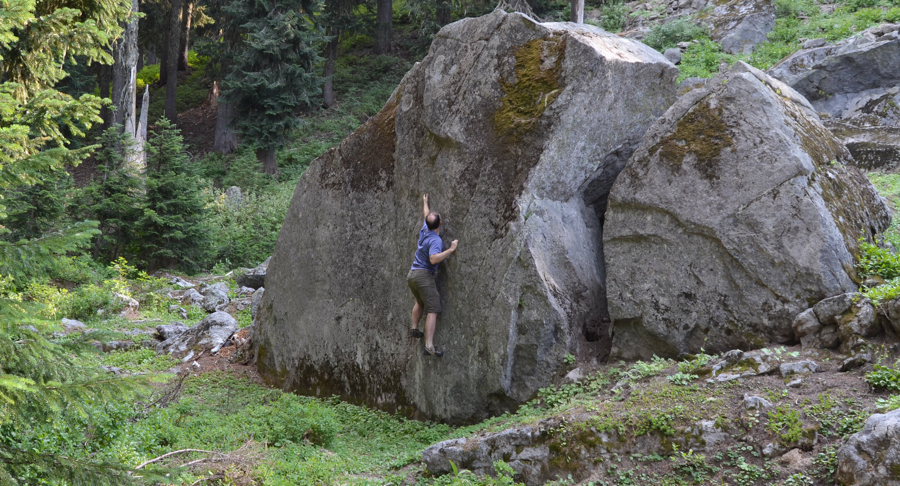 Best Places to Boulder in Portland

Less than three years ago, if you asked someone where you could boulder in Portland, they would quickly reply Carver or Bridge of the God’s Boulders.  Luckily several groups of developers have labored to establish many new areas.  It is important to note, howerver, that some areas in the Portland metro are not worth visiting.  So where should you go?  The conensus is that Carver, Bridge of The Gods, Hamilton Mountain, Lost Lake, Boulder Mountain/Lost City, and Herman Creek areas are the best choice for areas to visit.  I also want to group Larch Mountain inthere because it’s really close to Vancouver, WA and has some decent–not world class but decent– bouldering and free-standing boulders.  Cascade Bouldering area or Cascade Boulders is also a popular spot but a great deal of the area is poor quality and not worth visiting.  I don’t know how many times I get emails asking where the ‘good’ bouldering area at Cascade is.  Cascade has some good stuff,, don’t get me wrong, but the area is plauged with pebbble-sized boulders and is spread out over a large area so it’s important to know where the good boulders are before setting out.  I recomend the Herman Creek side as great problems can be found there and at Table Rock at the crest ofo the Herman Creek trail.

Below is a list of areas near Portland, Oregon with bouldering.  Included is a brief overview of the areas and what you can expect at each spot.  If you have any questions feel free to email us about any of these spots.  Bluebiner@gmail.com 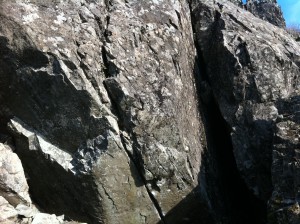 The Larch mountain bouldering are is located just above Vancouver/Camas, Washington.  The Larch Mountain Bouldering area is several individual areas.  The Lower area, Main Bluff or Wild West, and several satellite areas are located within a mile of the Main Bluff.  I recommend visiting the Lower Area where the Leavenworth Boulder and Black Forest Boulders are found.  These offer good warmups and the area as a whole can suck up a good part of your afternoon if you let it.  The problems at the Main Area are pretty good with some minor insignificant boulders mixed in with the larger/better ones.  The area is sometimes (currently as of 2014) gated.  This makes a slightly longer approach but it doesn’t take more then 15 minutes to get to the area.  Gun-toting locals are abundant here so expect to find many Guns-and-Amo poster boys lurking around the roads with shells flowing off their guns like a waterfall.

The main areas on Larch are:

Lower Area:  Area on the L-1500 road with the Leavenworth, Eiger and Matterhorn boulders. as well as a small cliffband that is undeveloped.  The two largest boulders on the south side (below L-1500) Eiger and Matterhorn, have some excellent problems that make the lower area an option if you don’t want to walk to the Main Bluff/Upper Area.

East Bluff:  Not much of a bluff but if you walk up the road to the bluff.  Simply drive a little over a mile farther than the Lower Area and you will see a road-split area and you must walk left and uphill past a gate that was added in Spring of 2014.  The East Bluff is the first area you see on the right with rock.  This is one of the smaller areas here.

North Slope Area:  Just a bit farther uphill on the closed road will bring you to boulders on the road and off in the woods.  This is a fun little spot to get some solitude and boulder without crowds, not that there ever is any here anyway.

Main Bluff:  Also called the Wild West, this spot has some problems ranging from V0- to V8 and has the most problems and concentration here.  Simply walk to the crest of the road and you will arrive at this area.  I think it is sometimes easier to walk up the gated road from the Lower Area and head right at the top of the hill to get here but that’s just me.

From Vancouver, WA take SR 500 east to Livingston Road.  Make a  right onto L-1000, a  Forest Service road and go 2.1 miles to a 4-way intersection.  From here make a right onto L-1500 just before the L-1000 road heads down towards the Prison.  Go right onto L-1500 and drive up an incline and duck when passing the shooting pit.  Continue a few more miles and you will see a boulder off to the Left and on a hillside near a blocked road heading 180-degrees back.  This is the Lower Area.  For the other areas drive a bit farther and find an intersection where a blocked road heads uphill to the other areas and the Main Bluff at the summit. 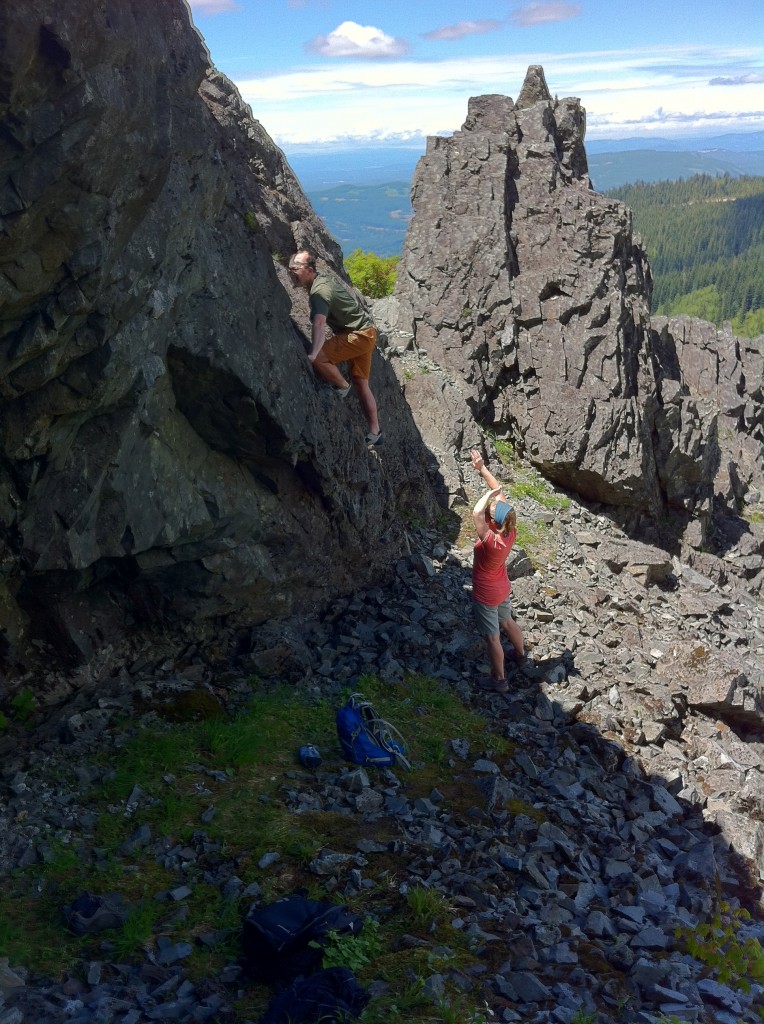 Located just a few miles, as the crow flies, from Larch Mountain, this area offers a longer hike and some much less popular bouldering on massive boulders near a cliff.  Simply hike the Silver Star Trail from Grouse Vista just east of Larch Mountain and you will be at this area.  Silver Star Bouldering is limited but has some fun problems if you plan to be heading by the area.

Everyone has heard of Carver at this point so there is no need for introduction.  What is important, however, is that you need a membership to climb here.  Please adhere to the policy in place that allows bouldering if you have signed the wavier and are a member who is allowed to climb here.  It is pretty easy to get a membership at this awesome area.  Some of the oldest, best, and hardest problems in Portland are located at this area.   For information about how to climb here and where it is visit the Carver Climbing Clubs website.

This is one of the best areas to boulder near Portland.  It is located in Beacon Rock State Park in the talus just behind the Horse Camp trails on Kueffler Road.  This area was discovered, developed, and is what it is today thanks to the efforts of Aaron Vitt, Matt Slayton and a core group of devoted locals who have dedicated their time and efforts to develop this area.  The area has some of the best lines in and around Portland.  Sure some of the talus landings detract from this spot a little but the area is the best in the Gorge along with Bridge of the Gods Boulders, and Upper Kueffler Road.

A selection of small boulders are located below Beacon Rocks west side.  Some of the oldest problems in the Columbia Gorge are located here.  This spot is small and low on the list of areas to visit but some hard problems are actually located here. 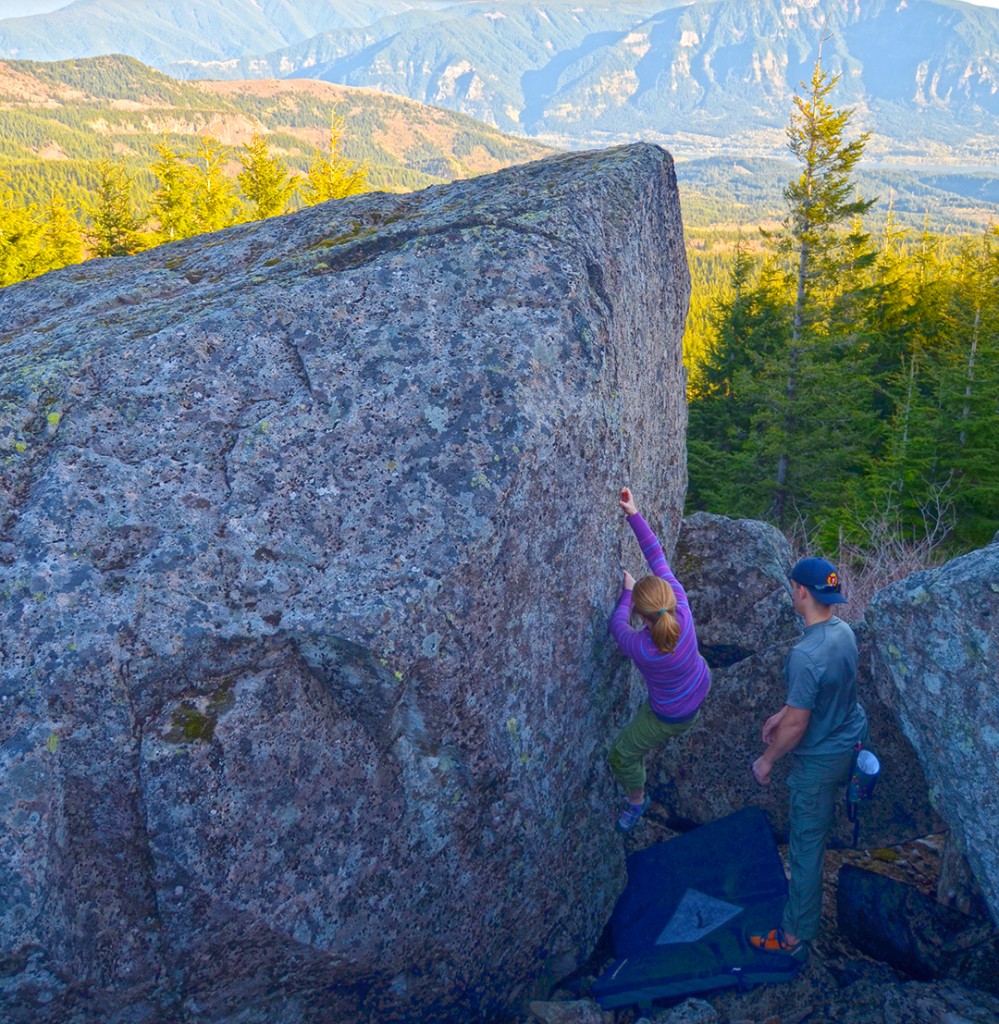 This area has some a few of the best boulders in Portland I just wish there were about 100 more of them.  This small area has breathtaking views, 4-star quality rock, and some excellent problems.  Make it a point to visit this area at least once if you are in PDX.  You will most likely return to hit all the classics here.  The rock is volcanic but looks and feels like Leavenworth granite.

A small area located across the valley from Upper Kueffler, this spot has only a few boulders.  It is good rock, the boulders are just way to small and there are not enough problems to justify a visit but it is what it is.  If you live nearby it’s worth checking these out at least once to get your own opinion.

Located between Hood River and Mount Hood, this area is probably the best bouldering near Portland.  Nearby Lost City is a similar location–don’t be confused by the name, we’re calling it Boulder Mountain now to create less confusion.  I can’t say enough about this spot, it’s awesome.  If only there were more boulders.  About 30 good boulders that have good height; 20 foot giants are located here.  This spot a good mix of quality rock and grades that are from V0- to V9ish currently.  There is potential for much harder projects here for sure.  The area was first climbed in 2007 but recently has had a lot of attention.  There is a local myth that thousands of problems are located here.  This is a bit out of proportion but there are several great problems on about 30 high quality and large boulders.  You can easily milk a few hundred problems out of this area if you count the smaller more insignificant boulders.  This is an amazing spot and a must-visit area.  It is one of the best if not the best in Northwest Oregon.