Got out to do some Autumn Bouldering near the Columbia River Gorge this week.  The leaves are in full bloom and the weather is actually holding out.  Wetness in the Northwest has been oozing from the sky and bullets of moisture have targeted the boulders near Portland.  I half expected to find sopping boulders that hand’t dried yet from the constant ilk the past two weeks brought but I was surprised to find bone dry stone all over the Gorge.  Mt Hood is already coated with significant snowfall and there have even been some early-season skiers earning their turns  in the pow.

I headed out to some boulders near Hood River.  There are some really nice areas with volcanic rock near Hood River that dry quick after rain.  I’m surprised at how quickly you can get to these spots from town and also surprised more people don’t climb here.  I’m hoping more climbers start to develop and climb these spots because they are in an amazing setting that I was lucky to get to with leaves in full bloom.  In two weeks this colorful tapestry will be reduced to branches bare bones clacking together in the early winter wind.  As much as I am happy to see snow flying low on Hood it’s also sad to be saying goodbye to some of the boulders until spring.  Many of the lower areas between Mt Hood and Hood River are year-round bouldering areas but some are lost under winters snowpack; missed like a friend off to college.

I managed to squeak out Stardust V2 and nearly got Middle of the Road V6/V7 but the top was a little too moist for sending action.  That and I’m weaker than poop right now.  The above mentioned problems, in case you were wondering, are near the West Fork Boulders, a pretty well-known area at this point.  They are about 5 miles away from the West Fork area at a spot  with some good problems and a few good  sub-areas on the hillsides that surround it.  I really wanted to hike in to a pretty nice spot with some larger boulders that involves a 15 minute trek and gets you amazing fall panoramas but I just lost daylight. 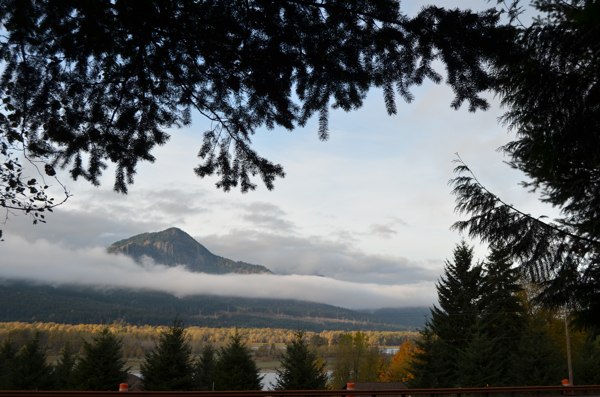 It will be great to get out and send again soon.  Knowing how quick stuff dries after a monsoon is super helpful info for the Northwest bouldered.

If you have been reluctant to go out this fall and crush, don’t be.  It’s amazing weather and beautiful scenery.  Even in a light drizzle you can still climb quite a bit.  I hope everyone gets out there soon and enjoys what fall in the Gorge has to offer.

Hope to see you out here soon.